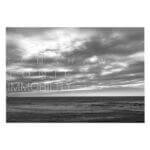 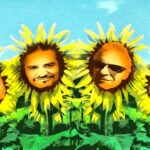 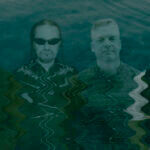 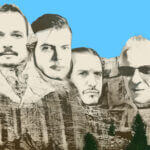 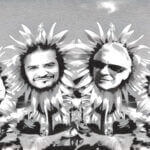 It doesn’t matter though, because they’ve crept back just when things got really weird, and they’re ready to put the “new” into “new normal” with—wait for it—new music.

Thawed out from their slumber, they sound like, well, Tomahawk…

“Tonic Immobility is almost a summary of everything we’ve done,” states Duane. “There are references to previous things spread throughout the album as well as new territory. On any of our albums, you’ll find those faster, high energy, abrasive, and dissonant songs. You’ll also find the slower, atmospheric, groove- and tension-based moments too. There’s always been a touch of, dare I say, Latin music in the form of Bossa Nova or flamenco-influenced guitar. All of those things appear on this record.”

They’ve built quite the foundation since their first record, Tomahawk, in 2001. Following Mit Gas [2003] and Anonymous [2007], they dropped Oddfellows during 2013. It marked their best debut, reaching #9 on the Billboard Top Independent Albums Chart. Not to mention, critics really got it! The A.V. Club gave it a grade of “A-,” Revolver Magazine rated it “4-out-of-5 stars,” and Pitchfork chimed in, “This lurid, thorny, profoundly weird music–just comes tearing out.” All kinds of touring and festivals followed before the members went back to their gazillion other gigs in 2014. Fast forward a few years later, Duane, John, and Trevor laid down initial tracks in various studios around Nashville with co-producer Paul Allen. Firing the music across the country via the interweb, Mike recorded and engineered his vocals up in San Francisco.

“Tonic Immobility could just be something in the air we’re feeling,” says Duane. “It’s been a rough year between the Pandemic and everything else. A lot of people feel somewhat powerless and stuck as they’re not able to make a move without second guessing themselves or worrying about the outcomes. For as much as the record possibly reflects that, it’s also an escape from the realities of the world. We’re not wallowing in negativity or getting political. For me, rock has always been an alternate reality to everything else. I feel like this is yet another example.”

The first single, “Business Casual” rides an ominous bass line and creaky palm-muting right into a clobbering hook managing to rhyme “bad cholesterol” and “business casual.” “As the title suggests, it’s a mocking look at the life of work in America,” he elaborates. “On the other hand, it has nothing to do with anything.”

The second single (but album finale) “Dog Eat Dog” bares its teeth with grinding guitar and off-kilter falsetto in between barks and whistles.

“It balances the sound,” Duane goes on. “Mike does this bizarre high-voiced falsetto thing that felt so surreal to me. He initially floated that on one of the demos. He was like,‘I’m not sure if you’re going to like this’, but I loved it.”

“Predators and Scavengers” pounces with erratic riffing and another manic refrain based on Duane watching “bobcats, foxes, birds, chipmunks, and other creatures in the backyard.”
He ponders, “It seems like today all we’ve got are predators and scavengers in society. Is this ‘dog eat dog’ world what we’re evolving into?”

Then, there’s “Doomsday Fatigue,” which lassos together a Spaghetti Western-style soundscape and an eerily soothing refrain. “That’s classic Tomahawk,” adds Duane. “Mike and I have always referenced the Spaghetti Western thing, and it gives a bit of relief.”

Ultimately, now is as good of a time as ever for Tomahawk.

“Hopefully, we push all of the buttons of what you want from a modern hard rock band,” Duane leaves off. “When you get different groups of people together, they bring out different things from each other. With musicians, it’s the same thing. We all knew each other back in the nineties and never really got a chance to do these things. For me, Tomahawk has always been this special place where we can play hard, heavy music and mix in expressionism with a vocalist who can do anything. Tonic Immobility is a statement we’re still around and still doing it. We’re not kids anymore. This isn’t some rich Rockstar thing. We do this because we like it, and we like each other. You can take life at your own pace. Sometimes, you just have to wait until the time is right. Maybe now is it.”