Italy’s mind-altering trio Ufomammut have this week revealed a new live video for the track “Mars” (which premiered via Echoes & Dust).

The video for the track ‘Mars’, by Stefano Tocci was captured during Ufomammut’s past spring tour when the band presented (and recorded) the XX live performance. An acoustic rendition of “Mars” and other familiar Ufomammut songs can be heard on XX, a special new recording contained within the recently announced boxed set of the same name, due for release on Supernatural Cat this September. More info and further live dates below.

The band comments: “We spent 10 days on the road last spring, focusing our live show on the recordings of XX, an acoustic set based on 6 songs from our 20 years career, revisited in a new way. Urlo decided to play synth on stage, Poia took his acoustic guitar and Vita embarked on a different approach via the drumkit. Gig after gig the songs grew inside us and the reaction from the people made us so proud and happy of what we were doing. XX is the result of this little tour and a reflection of the warmth people gave us while we were approaching our music in a very different way. XX is something magick, something different and unique for us“.

To be released on both CD and LP, the XX box set will feature nine Ufomammut albums, all individually housed in sleeves with exclusive cover artworks, created specifically for this release. The box sets will include all eight studio albums; Godlike Snake, Snailking, Lucifer Song, Idolum, Eve, Oro, Ecate, and 8. Additionally, the box will include a new release, titled XX. This new recording features six revisited tracks – “Satan,” “Plouton,” “Lacrimosa,” “Infearnatural,” “Mars,” and “Destroyer – which were re-recorded during the band’s recent European tour. These special box sets will also include a 64-page book with original covers, photos, and lyrics to all songs with an additional poster, backpatch, and sticker. On XX Poia performs on acoustic guitar and effects, with Urlo handling vocals, synth, and effects, and Vita on drums and percussion. Ciccio and Stefano Tocci handle sound production and recording. The sound was mixed by Stefano Tocci at Ampire Studio and mastered by Luca Piazza at Zen Garden Studio.

The XX boxed set shall be released on September 9th through Ufomammut’s own Supernatural Cat Records.

PRE-ORDER THE XX BOXSET FROM UFOMAMMUT 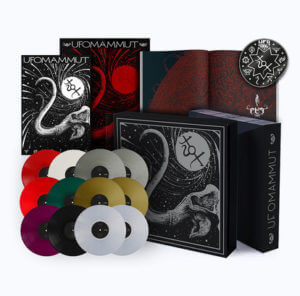