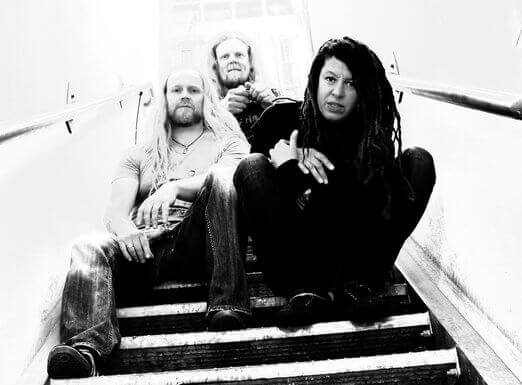 (photo supplied by the band)

The German trio Treedeon will release their second album, Under The Manchineel, this February the 23rd via Exile On Mainstream. Advancing the record’s release, the group release the crushing new track, “Breathing A Vein”.

About the track, bassist/vocalist Yvonne Ducksworth comments, “We recorded Under The Manchineel at Studio Wong in Berlin; they have a great Live setup for us. The song “Breathing a Vein” surprised me; turned out to be one of our favourite songs on the record. As far as vocals: it really melds what Arne and I do best to accompany one another. The songs lyrics are echoing that as well: two opposites who manage to belong together.”

Under The Manchineel is the follow-up to their debut, Lowest Level Reincarnation, which was released some three years ago. This bruising second album marks the arrival of a new drummer Andy Schuenemann, of post-rock instrumental duo Alphatrip, joining bassist/vocalist Yvonne Ducksworth and vocalist/guitarist Arne Heesch, and taking the band in an even heavier direction.

The seven tracks on Under The Manchineel have foundations in sludge, noise, and doom, also incorporating unexpected melodies into their colossal wall of sound. This thunderous catharsis, reaches levels of emotional intensity previously untapped. The lyrics are fueled by a multitude of political issues including general disenchantment with world events, and the current world order. The track “Manchineel” — another one of the album’s many highlights — is a clear example ofthis as raging vocals of lyrical angst target all the forces declaring war on our society and our planet.

Exile On Mainstream Records will release Under The Manchineel on CD, LP, and digital formats on February 23rd; find preorders via the revamped label webstore.

“There is a legion of sludge metal bands out there today that have pushed the genre’s extremity and direction in new and exciting ways, but few do it like Treedeon. The instrumental side of their music draws heavily from doom and noise, as well as sludge, moving at a thick, crushing pace. Vocally is where Treedeon set themselves apart, as you’ll hear on ‘Breathing A Vein.’ The dueling vocals of Yvonne Ducksworth and Arne Heesch dance from clean and bright to throat-ripping shrieks and back, creating an added dynamic to the new song.” – DECIBEL