The longstanding premier UK music and arts event Supersonic Festival 2018 recently announced its return to the cultural hub of Digbeth in Birmingham between 22nd and 24th of June, offering a weekend full of imaginative, stimulating and downright fun experiences, placing audiences at the very heart of its programming. Championing an array of ambitious, fiercely independent, and progressive artists, each committed to doing things in their own unique way, the initial announcement included the news of the UK premiere of new Gazelle Twin material, The Ex performing the Supersonic Kids gig, and the first major large-scale project from artist-in-residence Dennis McNett, amongst many other names.

Robert Aiki Aubrey Lowe is an artist and multi instrumentalist working with voice in the realm of spontaneous music and a prolific collaborator. He has had a long-standing relationship with Supersonic Festival, first performing as Lichens at the 2010 edition, returning in 2012 for the 10th anniversary edition both performing and curating part of the film programme, and in addition, as part of legendary band OM who have performed at many of our events. We are delighted and
honoured to announce that he is our guest curator for Supersonic Festival 2018. Bringing to the festival a selection of artists who push the boundaries of both performance and sound. These include…

Moor Mother is the viscerally charged output of Philadelphia based interdisciplinary artist, Camae Ayewa. Her music is often harsh and strange, projecting both the cathartic anger of punk and the expansive improvisatory spirit of Sun Ra. Using a variety of machines, field recordings, and analog noisemakers, Ayewa constructs fractured, cacophonous waves for her words of punishing pertinence to ride. Moor Mother brings her powerful message to the Supersonic Stage this June after 3 days in the MOOGlab as our artist in residence, hosted by Royal Birmingham Conservatoire.

NYC duo Wetware build on the legacy of industrial music and New York’s long history of dance music fused with confrontational performance. Vocalist Roxy Farman, captures the audience’s attention immediately, using her body in tandem with her voice as a weaponised vehicle for the band’s anxiety filled performance.

Croww is a Manchester based artist working around the periphery of music of the vantablack variety, and pecking at the corpuses of Black Metal, Flashcore and DnB and nesting new mutations of hypermodern dance music.

QUOTE FROM ROBERT AIKI AUBREY LOWE:
“For me Supersonic festival has not only stood out from others of its kind by pushing it’s scope away from the one dimensional trap that is indicative of most music based festivals, but has programmed things people might not be aware of. And due to the nature of the event itself those in attendance tend to be open to investigate those things. It’s an amazing feeling to be allowed the opportunity to present sound and visual works within the framework of an established festival that gives trust to others to bring in outside perspectives.”

Supersonic are also delighted to invite legendary folk singer and one of England’s most respected song collectors Shirley Collins (MBE) to perform at this year’s event, having only performed a handful of shows after a 38 year hiatus. Though Shirley Collins has been absent from the music scene for many years, her impact has not diminished, the likes of Stewart Lee and Angel Olsen laud her. Shirley Collins has also just released her first album in over thirty years entitled Lodestar which has been met with much critical acclaim. The live performance at Supersonic promises to be something truly special indeed.

Brazilian based DEAFKIDS are Neurot Recordings’ latest signing. They juxtapose monolithic drone riffage with frantic polyrhythmic detours, and cite the syncopated beats of African drums as a major influence. Their music is a guttural, scorched mutation of psychedelia – using the term psychedelic in the absolute loosest sense is apt, as the band claims that “non-genre genres” are a chief source of inspiration, referencing anything from their own background in punk, right the way
through to spiritual jazz, practically any form which allows the artist to experiment with the utter extremes of musical expression.

Hailing from Osaka, Japan, Goat create music unlike many other rock bands. Disregarding the musical scale of instruments as much as possible, the band creates songs that consist of noise and
muted sounds that are produced when sound is emitted. Building compositions that explore rhythmic aspect even further, centering more on intertwining patterns of repetitive rhythms. The trance and fatigue brought about from relentless repetition and the melody-like sounds
are both urban and tribal at the same time.

For the Japanese avant-garde synth wave duo Group A , their early shows came as a shock to most spectators, non-stop waves of experimental noise, intensely emotional poetry readings and nude
live-paintings. While their mixture of synth heavy minimal wave, avant noise, striking visuals and performance art still carries the very breath of early industrial pioneers such as Throbbing Gristle or Cabaret Voltaire, the duo has since evolved into a beast of its own, sharing bills with artists such as Acid Mother Temple, Merzbow, Nisennenmondai, Phew, and Melt Banana.

Joasihno are Cico Beck (Aloa Input, the Notwist) and Nico Sierig. They shall perform with a new live set up that combines robot instruments, electronics and trashy percussion. Switching between analogue synths, world percussion instruments and computer programming, they draw inspiration from experimental pioneers like Mort Garson and the melancholy of Kraut Electronica, with the knowledge of contemporary beat making and in big admiration of the chansons of Moondog and the patterns of Steve Reich. Psychedelic machine music from Munich.

Terminal Cheesecake are one of England’s greatest musical oddities, chief exponents of unmerciful, head-frying psychedelia, deranged dub and electronica. Noise rock, dub, industrial and heavy, heavy psychedelia: this is a group that goes as far back as the formation of the UK underground rock and industrial scenes. Formed in East London in 1988 as the first band on Rough Trade’s Wiija label, they are still turning in incendiary live performances and uncompromising recordings to this day, having celebrated an influential Peel session, six albums and two EPs in the meantime. 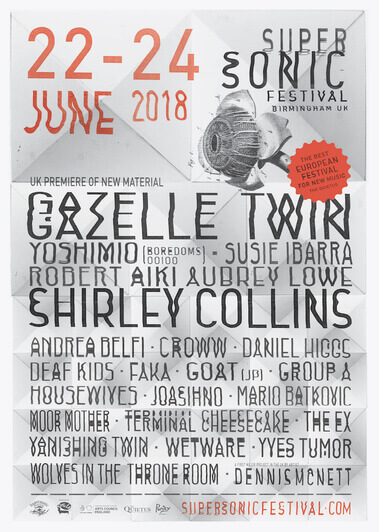 “Whilst Supersonic deals superbly in experimental music, it also doesn’t take itself too seriously and alongside the mind-altering music, record fairs and pop-up stalls, activities such as black-metal life drawing or Black Sabbath karaoke are offered, as well as events and gigs for children. This thoughtfulness leads it to be a deeply experimental weekend but also a genuinely accessible one too. During a period in which many line-ups of alternative festivals are becoming increasingly uniform, Supersonic brightly stands out as a true alternative to the alternative” – INDEPENDENT 4*