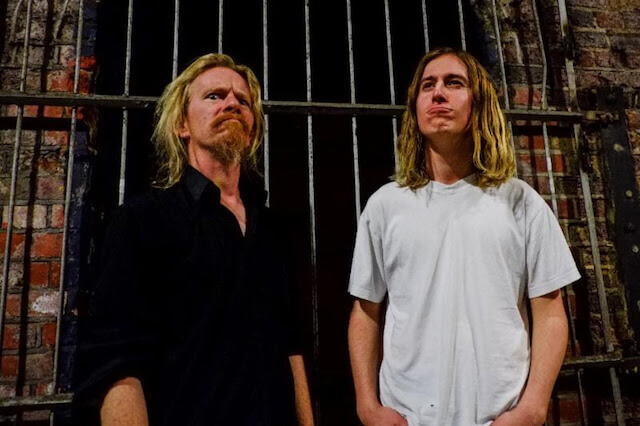 UK-based duo Noisepicker present a new video for “A Taste Of My Dying,” a track from the band’s 2018 Exile On Mainstream-released debut LP, Peace Off. The video has been made available to the public through a premiere at Astral Noise, as the band prepares to take part in Exile On Mainstream’s 20th Anniversary label Roadshow tour and celebration at Roadburn.

For their debut full-length, Peace Off, Noisepicker continue a similar trajectory to their EP, heavily influenced by their love of distorted heavy sounds, and blues music, as well as the spirit of the UK punk scene, in which Armstrong has been immersed in for years. Noisepicker’s Peace Off is an album of heavy, gritty, gnarled and thrashing blues romp, which takes a myriad of sonic twists and turns throughout, making it one unpredictable listen. It’s time to pick your noise and eat it.

Noisepicker’s Harry Armstrong (also of End Of Level Boss, Lord Of Putrefaction, Decomposed, Hangnail, The Earls Of Mars, and others) offers, “As with all of our videos, we have no budget, so everything is filmed and edited ourselves. Usually I just point a camera at Kieran and he goes with the flow. I think he’s learning to trust me now… Especially as all his scenes were filmed indoors for the first time! I decided to go on a little road trip over the new year and shot the whole thing in a couple of weeks making the locations become ever more industrial as I went along. It’s based around the idea that you can run, but you can’t hide. But what is it that YOU are running from? hmmmm?!! Sit back, turn it up and enjoy. The ride will be over all too soon.”

Peace Off is out now through Exile On Mainstream as 180-gram black LP in a beautiful gatefold sleeve containing artwork by Roland Scriver, and while the album is not be available as standalone CD-only release, the LP contains the full album on CD as well. Place orders via the Exile On Mainstream webstore and see the previously-issued video for “No Man Lies Blameless” HERE.

Noisepicker will join a wide cast of label acts at one of Exile On Mainstream’s massive galas celebrating their 20th Anniversary this year. The band will perform with the likes of labelmates Ostinato, Darsombra, and Treedeon as part of the EOM 20 Roadshow tour, playing Potsdam April 9th, Hamburg April 10th, and Cologne April 11th on their way to perform alongside Ostinato, Conny Ochs, Treedeon, Bellrope, Confusion Master, and more at the label showcase on April 13th at Roadburn Festival in Tilburg, Netherlands. Watch for additional tour dates to be announced throughout the year.

After years of performing, and reveling in loud, hard-hitting music, UK-based singer and guitarist Harry Armstrong has sought the darker side of his musical taste, channeling heavy blues in a new group called Noisepicker. Armstrong had been germinating twenty minutes of material when he recruited Kieran Murphy on drums, who was working in a bar, washing dishes to the soundtrack of Orange Goblin and Muddy Waters just stumbling distance from where Noisepicker’s sound was being conceived. Armed with a trusty Fender Stratocaster, a single loop pedal and a pile of patched together old equipment, Noisepicker performed a handful of gigs in small pubs, clubs and art galleries, and within two months the pair captured their sound in South London’s Crows Nest studio, which resulted in the doom/punk/blues EP.