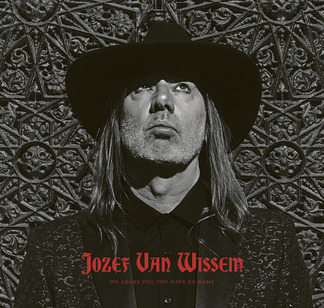 Jozef van Wissem – We Adore You, You Have No Name:
1. How You Must Leave
2. Deliverance
3. You Know That I Love You
4. Bow Down
5. Unto Thee I Lift Up Mine Eyes
6. Beyond The Brook Of Blood The Rain Is Fire
7. When The Hour Of Salvation Comes The
Heavens Are Made To Flow With Honey
Jozef van Wissem dates:
Dec 1st: NOWA SYNAGOGA, GDANSK
Dec 2nd: BARDZO BARDZO, WARSAW
Dec 5th THE CUBE, BRISTOL
Dec 7th: MIRTH, MARVEL AND MAUD, LONDON
Dates will be updated here: http://www.jozefvanwissem.com/tour/
ORDER LINK: https://consouling.be/release/we-adore-you-you-have-no-name
“exceptionally gorgeous, and the new black and white video featuring moribund lilies springing to life amidst the ebb and flow of water is stunning and conveys the emotional intent of the music. Utterly irresistible.” – POPMATTERS
“Enthralling” – RECORD COLLECTOR
“How rare it is for an album of such few ingredients to be so effusive, so meaningful and thought-provoking. With its daring simplicity yet wondrous storytelling ability and old-fashioned warmth, We Adore You, You Have No Name stamps down its foot and demands to be heard again and again.” – 8/10 GHOST CULT
“Enter the dark, mythical world of minimalist composer and acclaimed lute-player Jozef van Wissem. Accompanied by his baroque instrument, Van Wissem creates highly distinctive sonic soundscapes by blending avant-garde and baroque music practices. With a trailblazing approach of the lute, Van Wissem pushes his instrument out of the academy and into more adventurous terrain”. – LE GUESS WHO?
“All Jozef van Wissem wants to do is liberate the lute, but in his efforts to bring this forgotten instrument into the headspace of today’s busy minds, he has also managed to bring the sound of the renaissance with him. He has been involved in a diverse range of projects, bringing his reinvented lute compositions into the world of high art, television documentary and even the latest video games.” – FIFTEEN QUESTIONS
www.consouling.be