NEW TRACK “CURSE OF THE SERPENT” AND PRE-ORDERS POSTED

Philadelphia, Pennsylvania-based metallic hardcore group Jesus Piece present their raging debut album, Only Self, confirmed for release on the 24th of August through Southern Lord. The first single from Only Self, “Curse Of The Serpent,” is now streaming, as the label posts pre-orders for the album – listen and share below.

About the new song, the band collectively remark, “‘Curse Of The Serpent’ an ode to the grudges that everyone holds. It’s a song about long lasting pain sitting in the back of your mind. The kind that just
doesn’t know how to fuck off. We chose this song first because it’s a great introduction to the energy of this record but doesn’t define the overall sound. This is a great bridge of growth between old and new.”

Jesus Piece have left craters in their path over recent years, quickly developing a reputation as one of the heaviest, most uncompromising acts both on record and on the stage. With the brutal grooves of
Y2K-era metallic hardcore greats like Disembodied, Turmoil, and Buried Alive at the core, the band also incorporates elements of noise, ominous tones, and haunting atmospheres into their dynamic
songwriting. With crushing, modern, metallic production, Jesus Piece exist alongside the scene’s darkest and heaviest acts like Harm’s Way, Vein, Trail Of Lies, labelmates Xibalba, and more. Their music
thematically addresses issues of personal struggle and loss, racism, police brutality, and other social and political injustice, and the band continue to work tirelessly to play to everyone they can.

Only Self was recorded in Chicago at Bricktop Recording Studio with Andy Nelson (Weekend Nachos, Like Rats, Lord Mantis) mastered by Brad Boatright at Audiosiege (Integrity, Nails, Full Of Hell), and
completed with artwork by Dom Pabon, which can be seen below.

On Only Self, Jesus Piece deliver one of the hardcore/metal underground’s most anticipated debuts of this year. Southern Lord will release Only Self on CD, LP, and digital formats on Friday the 24th of
August. Find digital pre-orders at Bandcamp  and stay poised for physical pre-order options and additional audio samples to be revealed in the weeks ahead.

Jesus Piece have played live extensively in recent years, touring alongside Darkest Hour, Comeback Kid, Burn, Knocked Loose, Terror, Vein, Year Of The Knife, and many more. Jesus Piece have announced a  European summer tour, again traveling alongside Year Of The Knife from the 15th of June through to the 1st of July. The band will also make their return to This Is Hardcore in July, performing with the likes of
One King Down, Ten Yard Fight, E.Town Concrete, Sick Of It All, Arkagnel, Eighteen Visions, All Out War, Merauder, Harvest, and many more. See confirmed European dates in the poster below. 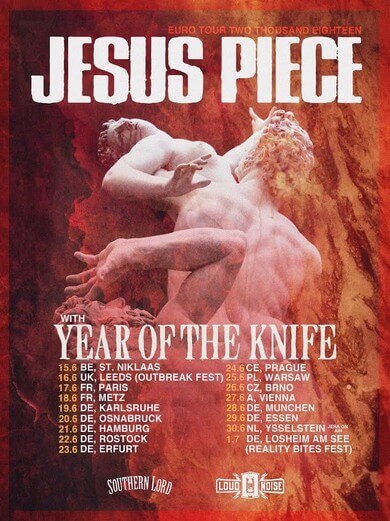 “‘Curse Of The Serpent’ showcases what the band does best. The breakdowns are relentless and biting, and you can just feel the fury build as the song processes. This is one nasty track.” – REVOLVER