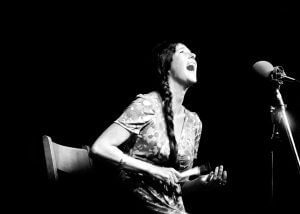 Constellation announce the re-issue of the rare, legendary and long out-of-print album Bush Lady, recorded in 1985 by First Nations and Canadian cultural icon Alanis Obomsawin. The album has been remastered from the original analog tapes, newly pressed on audiophile 180gram vinyl — and shall be released on CD for the first time. Bush Lady is the only record ever made by Obomsawin, rising to cult status in recent years, while Obomsawin has meanwhile received Canada’s highest accolades for her 50-year career as an activist documentary fillmmaker, including the Order Of Canada.

Bush Lady is a unique and magical record by any definition. It’s an invaluable example of contemporary First Nations music that blends traditional folkways with modern composition. Amidst the broader and long-overdue resurgence of interest in modern Indigenous music – perhaps most notably culminating with the Grammy-nominated Native North America (Vol. 1) 3xLP set released in 2014 (to which Obomsawin also notably declined to contribute, owing to her deep and warranted skepticism about the music industry) – Constellation is honoured to be working with this Canadian cultural icon to issue a remastered version of Bush Lady.

Alanis Obomsawin is a member of the Abenaki Nation and one of Canada’s foremost activist documentary filmmakers. Based in Montréal, Canada, she has directed 50 films with the National Film Board of Canada (NFB) that explore the lives and concerns of Canada’s First Nations, and has received some of the country’s highest awards, including The Order of Canada, the Governor General’s Award in Visual and Media Art, and most recently the 2017 Order of Montréal.

Before establishing herself as a filmmaker Obomsawin began her artistic life as a singer and musician in the 1960s, as Indigenous artists from across North America were rallying together in new assertions of cultural identity, consciousness and political rights, calling for greater reckonings with oppressive colonial history. She was invited by Folkways to perform at Town Hall in New York City in the early ‘60s and spent most of that decade primarily identifying as a singer, channelling traditional First Nations songs hand-in-hand with original modern compositions.

Obomsawin kept her musical output percolating alongside her burgeoning documentary film career, with performances at the legendary Mariposa Folk Festival among others. In the mid-1980s Canada’s national broadcaster (the CBC) invited Obomsawin to record an album; however, she was unsatisfied with these recordings and reclaimed the master tape, remixed the material, re-recorded the title track from scratch, and issued the ensuing Bush Lady album on her own private press in 1985 complete with her own artwork and liner notes. Lacking formal distribution – and with Obomsawin focused primarily on her documentary film career – only a portion of this pressing was sold at the time, the remainder occupying a closet in her Montréal home. The album has grown to become an increasingly legendary rarity ever since.