STREAM “SCORPIONS IN THEIR MOUTHS“

Known first and foremost as the lynchpin of instrumental band Earth, Dylan Carlson has become one of alternative music’s most ambitious pathfinders. It seems beyond appropriate, then, that Carlson’s new solo endeavor is titled Conquistador. The five-track record channels the indulgent drone of Earth while traversing uncharted sonic terrain.

Carlson’s previous solo work under the moniker drcarlsonalbion has consistently veered away from Earth’s American motifs in favour of English folklore. For his first proper full-length as Dylan Carlson, the guitarist returns West. Whereas Earth has sought to score Cormac McCarthy’s examination of white settlers’ horrific campaign against Native Americans in Blood Meridian, Conquistador bypasses the intermediary narrative of a novelist. Long heralded as a master of
minimalism, Carlson’s album demonstrates his ability to craft compelling symphonic compositions while exercising extreme musical frugality.

“I guess what ties this all together—all my musical projects and my life in general—is the idea of the quest, that search for new horizons and something unnamable and possibly unreachable,” Carlson says of the record.

Conquistador was recorded at God City Studios with Kurt Ballou during a weeklong break in Carlson’s 2016 solo tour of the East Coast of the US. After months of gestating the material that would eventually become Conquistador, Carlson viewed the session as an opportunity for both catharsis and collaboration, thanks to contributions from the esteemed Emma Ruth Rundle(baritone and slide guitar) and his wife Holly Carlson (percussion, photography, cover model).

Conquistador is due out via Sargent House on April 27th; preorder the album here  and check out US tour dates in support of the album this summer with SLEEP. More news coming soon. 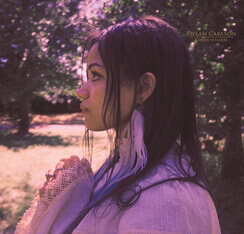 2. When The Horses Were Shorn Of Their Hooves

3. And then the Crows Descended

4. Scorpions in their Mouths