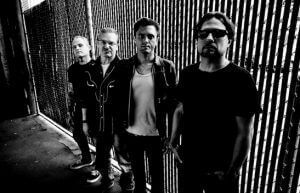 Dead Cross recently released a self-titled four-track EP (without warning) via Ipecac Recordings , ahead of European tour dates which commence this week. This week the band premiere a video for “Shillelagh (Panicker Remix)” – another production by Eric Livingston who also created the cover art for both the band’s full-length debut and this EP – cover art and track list below.

About the video Justin remarks, “We decided to team up with Panicker to open the narrow gaps better known as music genres. Our collective interest in music and art is pretty vast, so it makes sense for us to to hang outside of the box that we don’t want to fit in. Plus, Panicker is Three One G family and what he does musically is rad and makes sense. Eric Livingston’s video accompanies Panicker’s remix perfectly; showcasing the current state of anxiety, fear, and oppression. This is a reflection of the world we live in”. #consic

In case you missed it, the band previously shared a video for “My Perfect Prisoner” which you can view and share here.

“One of the year’s most brutal and surreal punk albums.” – TERRORIZER

“An absolute beast of an album. As soon as Seizure and Desist starts, you’re intoxicated by Lombardo’s whirlwind drumming and Patton’s scarily impressive vocal range. I’s a pleasingly concise record…this really is an album full of unfiltered joy.”- LOUDER THAN WAR

“Combative and direct. These adrenaline speedballs of hardcore punk and metal are certain to leave you juiced up and riot ready.”-RECORD COLLECTOR

“The result is an album that sounds as if it was a blast to make and one that’s immensely enjoyable to listen to.” – GUARDIAN

“Dead Cross have become a sum greater than their parts.” – METAL HAMMER

“A deliriously entertaining and cartoonishly brutal sub-half hour onslaught of the tightest metal-leaning hardcore punk you’re likely to hear this year.” – THE 405

“It has an individuality than allows it stand on its’ own two feet; a brash and aggressive statement that will leave many younger bands quivering in their wake.” – AVE NOCTUM

“This is the sound of focussed insanity and of all of the collective noises, voices and unwritten melodies that live inside your head, that’s been carefully filtered and sieved through a barely tangible crossover mesh before being let loose, in all of its magnificent glory, on an unsuspecting world.” – MASS MOVEMENT