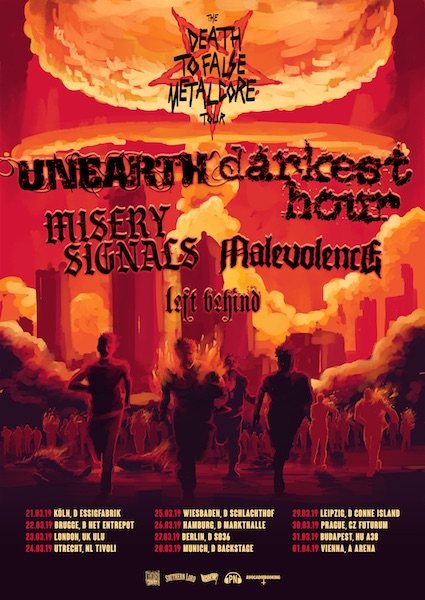 Darkest Hour announce the first European tour dates of 2019, “Death To False Metalcore” co-headlining with Unearth, and with support from Misery Signals, Malevolence and Left Behind. See all dates below.
From creating their own beer to ice-cream, Darkest Hour haved teamed up wth an ice-cream shop in DC, owned by Dischord Records employees, to create a new signature flavour. You can read more about the shop here.
THE DEATH TO FALSE METALCORE TOUR DATES:
DARKEST HOUR (rotating Co-Headliner)
UNEARTH (rotating Co-Headliner)
MISERY SIGNALS
MALEVOLENCE
LEFT BEHIND

Darkest Hour are also confirmed play The Power Of The Riff event on Sunday 18th of November in LA. This show will be headlined by SUNN O))), who in 2018 is celebrating their twentieth anniversary along with the Southern Lord label, both of which came to life in 1998. The rest of the lineup includes the original lineup of Washington, DC hardcore legends Scream, brutal metallic hardcore act Xibalba, Papa M – the solo project of David Pajo of Slint, Tortise, Royal Trux, and more – legendary underground entity Xasthur, and LA’s own hardcore punk outfit Entry. Find out more HERE.
Stream Darkest Hour’s Godless Prophets & The Migrant Flora in its entirety HERE and see the official video for the track “Enter Oblivion” HERE.

Raw as all hell, musically complex, melodic, yet cutting with razor blade precision, Darkest Hour’s most recent album, Godless Prophets & The Migrant Flora is fierce and hungry for blood, and this album helps solidify Darkest Hour’s legacy as a major metal powerhouse. The album is out now on CD, black vinyl LP, picture disc LP, and all digital platforms via Southern Lord; find ordering options at the label’s webstore, and via Bandcamp.

“Darkest Hour are back to doing what they do best – kicking ass and taking names. Heck, just one listen to barnburning numbers like ‘Knife In The Safe Room’, ‘This Is The Truth’ and full-force chugathon ‘Those Who Survive’ reveals that this is probably the band’s heaviest, angriest, and downright thrashiest album since 2003’s ‘Hidden Hands Of A Sadist Nation’…precisely the return to form we’ve been waiting for.” – TERRORIZER
“As rich and ferocious as it is blessedly authentic…a freshly bloodthirsty Darkest Hour with a gritty edge and a fretwork at the forefront…With some of the band’s early spirit restored, some newly memorable songwriting skills, and superbly euphoric guitarwork, it would seem that Darkest Hour plus Kurt Ballou plus Kris Norris is as killer a formula as expected.” – METAL HAMMER
“They’re firmly back on the horse here with a collection of acerbic aural hand grenades…the quintet set about ripping you limb from limb from the outset…A ripper.”  – ROCK SOUND
“‘Godless Prophets…’ isn’t just a return to form for Darkest hour – this sounds like the start of an entirely new chapter for them, and with my hope restored I’m once more happy to heed their prophecies.” – PUNKTASTIC
http://officialdarkesthour.com
https://www.facebook.com/DarkestHourDudes
https://twitter.com/darkesthourrock
http://www.southernlord.com
http://southernlord.bandcamp.com
http://twitter.com/twatterlord
https://www.facebook.com/SLadmin