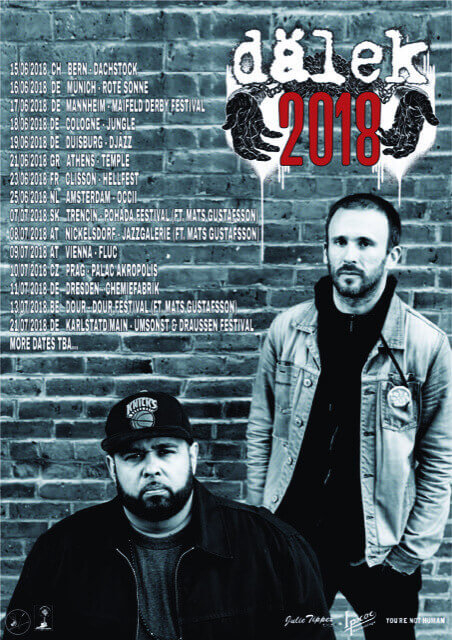 Dälek, the New Jersey-based “hip-hop abstractionists” (FACT), who last year released the album Endangered Philosophies (Ipecac Recordings), announce European tour dates in support of the album. A breakdown of the dates so far can be found below, some of which will feature Mats Gustafsson playing alongside Dälek. Plus more to be announced in the coming weeks…

With Dälek, the flow has often been usurped by scorched textures, the product of synthetic decay, themes flitting from pungent political rage through to outright Dionysian frenzy. On Endangered Philosophies, the lyrics are more focused and at the forefront than ever before, and MC Dälek’s new experiments with rhyme styles and flow makes for a vital concoction. There’s no doubt about it, Endangered Philosophies is a work of guttural catharsis, it is a call to arms

“It’s the swathes of psychedelic, almost industrial noise underneath that really sets them apart…add a lyrical incisiveness and political relevance missing in most hip hop and you’ve got something pretty special.” – ELECTRONIC SOUND

“Batting back reactionary forces while finding rare transcendence through static and noise.” – MOJO 4*

“An absorbing album, one that sees Dälek broaden their sound into a different territory.” -LOUDER THAN WAR

“musically they allow themselves variegated freedom that allows glimmers of light in the dark night. For all its bleakness Endangered Philosophies also strangely beautiful.” – DROWNED IN SOUND