Belgium-based composer Christina Vantzou’s fourth full-length for Kranky ventures further into the uniquely elusive and evocative mode of ambient classical minimalism which has become her signature: a fragile synthesis of contemplative drift, heady silences, and muted dissonance. In regards to the new album she speaks of focusing particular attention on the effects of the recordings on the body, and of “directing sound perception into an inner space.”

Vantzou describes the recording process as one of prepared spontaneity: that is, “having plenty of ideas ready to explore going into the session, but with enough time to depart from those ideas and
see what happens.” This mindset of premeditated exploration informs the album’s emotive textural intuition, with hushed drones and delicate gestures eliding in the periphery of the mix. She cites sleep and “the loosening of time” as two formative practices in her private and professional life, which manifests in the quietly hallucinatory properties of Vantzou’s music. No. 4 feels both endless and ephemeral, immersive and immaterial. It’s a music of horizon lines and half-light, mapped with feeling and foresight. 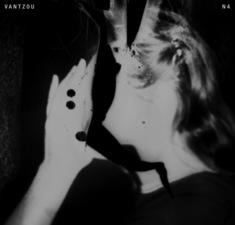 TRACK LIST:
1. Glissando for Bodies and Machines in Space
2. Percussion in Nonspace
3. At Dawn
4. Doorway
5. Some Limited and Waning Memory
6. No.4 String Quartet
7. Staircases
8. Sound House
9. Lava
10. Garden of Forking Paths
11. Remote Polyphony ft. Steve Hauschildt
Recorded in New York City and Brussels. Mixed in Berlin. A portion of this work was funded by a generous grant from The Flemish Community in Belgium.

Christina is part of the line-up for The Long Now, the closing event of MaerzMusik Festival in Berlin on 24th and 25th March.

“The becalmed and becalming instrumentals on no3 strike glow and glide in their somnolent and spellbinding beauty.” – THE WIRE

“Haunts the listener like some faint orchestra in an ectoplasmic state’.” – LE GUESS WHO

“…a breathtaking album, seamlessly mixing electronic and acoustic elements in order to create music that feels as earthly as it does
cosmic.” – ALL MUSIC