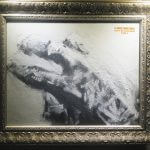 That chill in your spine makes total sense. Papa M is back in the room, and reveals a new album, A Broke Moon Rises, incoming via Drag City on the 17th August.
As the light from the broke moon floods in, you feel that you’ll survive – even if you’ll never be the same. 2016’s Highway Songs brought Papa M back to us, after many years of silence and several harrowing dances with death for his Id-ego/host body, David Pajo. Now, two years on down the road, we’re here again to witness A Broke Moon Rises.
Highway Songs was a necessarily cathartic experience in all phases. Afterwards, with no tour dates forthcoming (partially due to lousy clubs and their lack of wheelchair-accessible stage doors), it felt good just to play for fun again, like being in the practice space instead of the psych ward – a much healthier change of pace than some might guess. The five songs of A Broke Moon Rises find David focusing his technique in unknown directions, to find out what he can do with them. When that happens, he finds himself on the very spot where Papa M music becomes alive.
Layers of guitars curl and unfurl, falling away from the centre with feathery softness. Slide figures cut through the progressions with a rusty glide. Arpeggiations flicker with light, leading into a change that’ll break on yer ear like a small revelation. A Broke Moon Rises is meditative in the most active sense, with the unquiet mind leaping from place to place in a static, spartan theatre. All of which action makes hypnotic music, perfect for listening.
The record’s title is based upon his son’s observation of a half-moon one evening, and it helped infuse the record with an essential feeling, which draws to a decidedly tasty conclusion with David taking on an Arvo Pärt piece. After years of fascination with the music, listening in passivity, he finally decided to do something about it by playing himself.