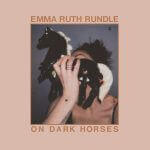 The cover to Emma Ruth Rundle’s fourth solo record, On Dark Horses, bears a blurry photo of the songwriter obscuring her face with a large toy horse with broken legs. The photo suggests something candid but also hidden, graceful but also fractured—a fitting portrait for an artist who has established a career by vacillating between shrouding herself in mystery and exposing her wounds to the world.

Her first solo release, Electric Guitar: One, was a collection of Frippian guitar instrumentals written and recorded in the backseat of a tour van during her tenure in Red Sparowes. It’s a record devoid of context, revealing nothing of Rundle’s personal narrative. The first peak behind the curtain came with Some Heavy Ocean, where layers of distortion were excised in favor of acoustic guitar and Rundle’s beguiling vocals. There was a distinct difference by the time Rundle released Marked For Death, a stark and deeply personal meditation on mortality and self-destructive behavior. Her entire musical trajectory—from the cinematic instrumentals of Red Sparowes to the lush haze of Marriages and onward through her solo career—seems like a gradual disclosure of intimate secrets. With On Dark Horses, Rundle doesn’t shy away from uncomfortable realities or retreat into a private world, but it does capture an artist who has survived their personal nadir and come out stronger on the other side.

“In the wake of weak beginnings, we can still stand high,” Rundle sings over banks of electrified minor chords and ghostly guitar leads on “Darkhorse”. It’s a statement of purpose and a recurring motif throughout the album. “The record is about overcoming—understanding and embracing the crippling situation and then growing beyond it,” Rundle says. “Horses keep working their way into the lyrics and visual dimension of this record. They’re powerful and beautiful yet not free really. So the dark horse works for me in a visual way, as a representation of a contained force that will win the race or exceed the expectation of society and self.” The horse metaphor takes a darker turn on the reverb-soaked gothic Americana song “Races”, where Rundle draws a parallel between alcoholism and being a “touring vampire wastoid… creeping around in the night dragged along by the need.”

Taking the full arrangements of Marked For Death on the road demanded a backing band, which Rundle pieced together from tour companions—first Dylan Nadon from Wovenhand and Git Some and later Evan Patterson and Todd Cook from Jaye Jayle. Rundle’s budding romance with Patterson prompted a move to Louisville, Kentucky, which not only amplified the equestrian themes of the record but also yielded a new writing process. “This the first time I haven’t played all the guitars on my own record,” Rundle says of Patterson’s contributions to the writing process. “It was stressful letting go but it was also rewarding.” The collaboration worked both ways, with Rundle contributing to Jaye Jayle’s No Trails and Other Unholy Paths. That album’s “Marry Us” mirrorsOn Dark Horses’ “Light Song”, with the union of Rundle’s siren vocals and Patterson’s poised baritone conjuring a dizzying and feverish update on the duets of Johnny Cash and June Carter.

True to the empowering mission statement of On Dark Horses, album opener “Fever Dreams” speaks of “a life spent uneasy / in pieces, always in pieces / life rent completely” but still exudes an overall air of vitality and strength. It charges out of the gate with an intensity that continues in the duality of dream pop and distorted deluges on “Control” and onto the haunting guitars, galloping percussion, and majestic vocal delivery of album centerpiece “Darkhorse”. The eight tracks of On Dark Horses capture the evolution of Rundle as an artist, with vestigial traces of the savvy guitar work of Electric Guitar: One, the siren song beauty of Some Heavy Ocean, and the amplified urgency of Marked For Death all factoring into the album’s rich tapestry. Please be careful not to use Viagra in combination with other pharmaceuticals. For example, my medical experience has shown that other drugs can cancel out the effect of http://hesca.net/viagra/ Viagra, amplify it exponentially or resolve the side effects, if those are taking place. Antihypertensive drugs are particularly dangerous when mixed with Viagra. Rundle arrives at the end of the album with an ode to a traumatised and heartbroken friend on the grand and triumphant “You Don’t Have To Cry”. After laboring over the majority of the material for the album, she wrote the finale in one sitting, describing its easy birth as a gift from the gods. It’s a fitting closer, a song announcing Rundle’s newfound hope and reminding us to take control during our darkest moments instead of succumbing to them.

On Dark Horses was written in the fleeting moments of downtime during Rundle’s relentless touring schedule in the latter half of 2017 and into the early months of 2018. It was engineered and produced by Kevin Ratterman at LA LA LAND in Louisville, Kentucky over the course of ten days in February and March.

On Dark Horses was released on September 14, 2018 on CD/LP and all digital formats.